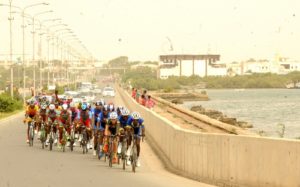 Today the Massawa Circuit raced through the ancient port city of Massawa. The race started at 8 AM and included 12 laps through the city – for a total of 121.2 kms. Although Massawa is typically quite warm the weather for the race was pleasant. So differently from yesterday’s challenge in which riders had to pedal against strong winds, today the weather was in their favor.

Throughout the race the peloton’s saw continuous attacks and attempts to breakaway by riders of Amore Vita, Eritel Sport club and the South African and the Eritrean National teams.

The overall circuit saw several breakaways that would ultimately be neutralized. Most of them of time gaps ranged from 00:00:19 to 00:00:40. Most of the attacks came from the Eritrean National Team. Meanwhile – Bike Aid’s riders sought to do the same. It looked like their strategy was to put their Eritrean teammate Meron Teshome on the lead. And in fact Meron Teshome did make it in the second place following Simon Mussie of Eritrea National Team; the youngest rider of Tour Of Eritrea 2017.

The swift speed the riders kept from the start finally neutralized all of the breakaways, forming an extended peloton. Until the 9th lap Sirak Tesfom of Eritel and Saimon Mussie of the Eritrean National Team attacked and broke away from the peloton at a time gap of 00:00:29.

They were joined by chasers from Bike Aid and the Eritrean National Team. That was when everyone expected a sprint towards the finish line, but Saimon Mussie changed the rhythm of race with a burst of speed that put him in the lead for the last lap and a half.

“In two years I want to be able to play in Tour de France” told young Saimon to a German journalist.