The Tour of Eritrea (Code 2.2) is around the corner, it is officially scheduled to commence on the 17th of April. The Tour of Eritrea is hosting four national teams and six clubs. It also encompasses three challenges which add color to the overall tour. They are:

The Fenkil Northern Red Sea Challenge began today the 15th of April in Foro under UCI’s Commissioner Isabella Fernandes’ supervision. The residents of Foro chiefly belong to the nationalities of the Afar, Rashaida, Tigre and Tigrinya, graciously welcomed us with a traditional coffee ceremony to inaugurate the race.

At the start of the race the peloton was unable to separate, with several failed breakaways. The most persistent attempt was that of Yohannes Tesfay (#94) of Sembel club. He was joined by riders from Amore Vita, Eritel, the Eritrean National Team, and the Rwanda National Team.

The peloton slowed down when forced to pedal against strong winds. The route saw slopes and graveled roads for the first 20 kms, which caused 4 riders to crash and fall. One of them would ultimately be the Fenkil Challenge champion.

At the outskirts of Massawa a new breakaway group formed at 00:01:40. The breakaway group included Clint Trevino Hendricks of the South Africa National Team. He led way at a 00:00:30 time gap. The race for a long time continued with with few breakaway attempts, led by Hendricks and followed by a group of chasers and the peloton at the rear.

At Mai Atal breakaways from the chasing group and the peloton formed a new chasing group. They new chasing group comprised: Jean Claude Uwizeye (#4) of Rwanda National Team, Zemenfes Solomun (#52) and Tesfatsion Mehari (#55) both from the Eritrean National Team, Sirak Tesfom (#62) of Eritel Sport Club and Pierpaolo Ficara (#83) of Amore Vita. They pedaled through the plains of Gahtelay aiming to reach South Africa’s Clint Trevino Hendricks (#75), who still was racing ahead, gaining more distance. Meanwhile, the peloton was slowly drifting away.

The first climb was near Dogali. The South African rider who led the race for almost 45 kms was joined by the chasing group. With more than 95 kms covered, the race started climbing near Dongolo Tahtay, with numerous breakaways from the peloton and the speedy pedaling of the leading group.

The challenging ascent near in Dongolo Laelay started splinting up with Tesfatsion Mehari (#55) and Pierpaolo Ficara (#83) fiercely driving ahead while trailed by Zemenfes Solomun (#52) and Sirak Tesfom (#62) racing at a time distance of 00:01:03. 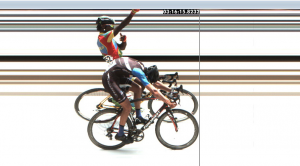 “The worst I have ever felt” said Zemenfes after the race when asked about his early celebration which cost him first place. Pierpoalo instead assured his certainty about Amore Vita inevitable wins in the coming challenges and the Tour in general. “The climb and the sprint were very important to me” explained Pierpaolo Ficara, “It is my first time in Africa and only two years in my professional career”. When after the race the riders of Amore Vita were rejoicing Pierpaolo Fikara’s (#83) hard work and luck, while Zemenfes Solomun (#52) tearfully resented his decision.

The next race will continue tomorrow Sunday the 16th with the Massawa Circuit. Information from Tour of Eritrea’s organizing crew indicate that the National Team of Kenya is expected to join the tour on the 17th.

Today’s tournament was definitely competitive and exciting to watch. However, the organizing committee did not prepare pertinent jerseys, and instead gave the winners a ‘sponsor’s shirt’!

Back to top
© Tour of Eritrea